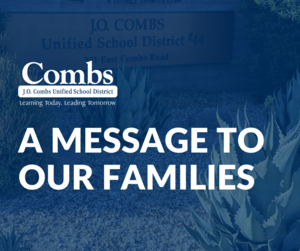 The J.O. Combs Unified School District has issued the following update regarding today's evacuation at Combs High School.
FOR IMMEDIATE RELEASE
December 12, 2019
Official Statement Regarding Student Threat
SAN TAN VALLEY, ARIZ. - The J.O. Combs Unified School District has issued the following official statement regarding today's evacuation at Combs High School:
At 7:15am this morning, a teacher at Combs High School discovered smoke in her classroom upon her arrival to school. The school buildings were immediately evacuated and Rural Metro Fire Department was called.
Upon responding, Rural Metro determined the cause of the smoke was an electrical problem due to an air handler in the 400 building. As a precaution, all students and staff were evacuated to the gymnasium and cafeteria. Rural Metro was able to isolate the event to the one classroom, clear the buildings on-site, and deem the school safe for students and staff to return to educational activities. The 400 building has been cleared for use, but the classrooms surrounding the affected area will remain empty until the odor and smoke clear. Alternative arrangements have been made for the students in those classes.
Thank you for your continued support as we work to provide a safe environment for our students.
Media inquiries can be directed to Kayla Fulmer at 480-252-4482.
# # #
MEDIA CONTACT:
Kayla Fulmer, Director of Marketing & Community Relations
J.O. Combs Unified School District
kfulmer@jocombs.org
O: (480) 987-5322 | M: (480) 252-4482
Published December 12, 2019 Print